The summer plumaged Black-throated Diver was again on the sea with single Great Northern and Red-throated Diver, also offshore 420+ Manx Shearwater south, 17 Common Scoter and a first summer Mediterranean Gull. Elsewhere a Coal Tit moved east along the Dune Ridge, the Slavonian Grebe was in the estuary and waders included 60+ Sanderling, c20 Dunlin and 11 Bar-tailed Godwit.

A Golden Plover was a very late migrant with other waders present including 62 Sanderling, 24 Dunlin, 19 Ringed Plover, six Whimbrel and five Bar-tailed Godwit. Elsewhere there were four Great Northern Diver and a first summer Mediterranean Gull offshore and late migrants included a Spotted Flycatcher in the Entrance Bushes and a Wheatear on the beach.

The first Storm Petrel of the year was offshore during the afternoon with a summer plumaged Black-throated Diver, 100+ Manx Shearwater, 80+ Kittiwake and 24 Common Scoter. Elsewhere wader counts included 86 Curlew, eight Whimbrel and two Bar-tailed Godwit on the Railway Saltmarsh with just 14 Ringed Plover and 12 Dunlin on the beach

A return to more typical fare with two Arctic Tern offshore and c85 Sanderling, c65 Dunlin and c20 Ringed Plover on the beach.

An unexpected highlight was the site's second Red-rumped Swallow, hot on the heels of last year's record, it flew through Greenland Lake heading NE at 8.15am. There was little other movement with just 18 Swift, 10 Swallow, two Jackdaw, a Collared Dove and one House Martin also going through. Elsewhere a Little Tern and a first summer Mediterranean Gull were offshore and wader counts included 134 Sanderling, 127 Dunlin, 35 Ringed Plover and five Grey Plover.

Over the evening high tide there were 153 Sanderling, 50+ Dunlin, 30+ Ringed Plover, eight Whimbrel, four Grey Plover, three Turnstone and a breeding plumaged Knot. Elsewhere the first summer drake Eider flew in from east of Orcombe and a Willow Warbler singing in the Entrance Bushes was a fresh migrant.

A first summer Mediterranean Gull was offshore but no other news was received.

The weather and birds were reminiscent of midsummer with little to report other than 170 Swallow through during the day, 66 Dunlin, 34 Ringed and a Grey Plover over high tide and an immature drake Eider offshore.

An unexpected highlight was a summer plumaged Black Guillemot offshore all afternoon, only the eighth site record and possibly a returning bird from this time last year. Elsewhere the Slavonian Grebe was again in the estuary and wader counts included 118 Sanderling, 110 Dunlin and 32 Ringed Plover.

The first Arctic Skua of the year was offshore with 60 Kittiwake and six Sandwich Tern. Two Wheatear on site was the only other news.

The southerlies and over night rain fuelled some optimism of a late fall, but as with most of this spring that optimism was misplaced with no new migrants around the  bushes, however wader numbers had increased; in the Bight there were 242 Dunlin, 78 Sanderling and 68 Ringed Plover. Elsewhere a Cuckoo and a Great-spotted Woodpecker were still on site and the Slavonian Grebe was in the estuary.

Two Cuckoo calling from the Entrance bushes early morning were the highlight with five Wheatear the only other grounded migrants. In the estuary wader numbers keep fluctuating with 92 Dunlin, 65 Sanderling, 50 Curlew, 13 Whimbrel, a Grey Plover and three Bar and two Black-tailed Godwit.

Seawatching during the morning produced an Arctic Tern, a first summer Mediterranean Gull, 120+ auk sp, 100+ Manx Shearwater, 20 Fulmar, 11 Common Scoter, four Great Northern and two Red-throated Diver. In the evening there were single Roseate, Little and Common Tern, two Arctic Tern and 22 Sandwich Tern feeding off Warren Point. Over high tide waders included 94 Dunlin, 48 Sanderling, 44 Ringed Plover, five Turnstone and three Grey Plover. Elsewhere five Spotted Flycatcher on site included one coming in off during the seawatch, other migrants included a female Whinchat in the Wryneck Plain and overhead 100 Swallow, 48 Swift and 15 House Martin. A pair of Shelduck were again on the Main Pond and with cygnets to protect the pond is refreshing clear of Canada Geese.

Three Spotted Flycatcher came in during the day with a Sedge Warbler in Dead Dolphin Wood and a Yellow Wagtail overhead the only other migrants. Also overhead there was steady passage of hirundines through the morning with 150 Swallow, 19 House and two Sand Martin before 10am. Elsewhere waders included 44 Dunlin, 29 Sanderling, 27 Ringed Plover and 16 Whimbrel. Offshore there were 35 Manx Shearwater and three Common Tern early morning with a Roseate Tern mid evening. Five cygnets on the Main Pond are the first onsite since 1990.

Offshore there were two Little and two Common Tern feeding with 17 Sandwich Tern, 200 Black-headed Gull and 13 Manx Shearwater. Wader counts included 29 Dunlin, 21 Ringed Plover, 11 Sanderling, nine Whimbrel and seven Grey Plover with the Slavonian Grebe again in the estuary. Elsewhere a Spotted Flycatcher was by the Main Pond and a Collared Dove flew through.

A Golden Plover on the beach was an unusual May record, nine Whimbrel in off the sea and a Sedge Warbler at the Main Pond were the only other new arrivals.

Over high tide there were 114 Dunlin, 34 Sanderling, 30 Ringed Plover, 20+ Whimbrel and a Grey Plover attempting to roost on Warren Point. Elsewhere the Cuckoo was still present along the edge of the Golf Course and 20+ Sandwich Tern were offshore.

A further passage of Swift early morning produced 200 birds before 8.30 a Hobby also went through offshore with Swifts at 8am. On the ground were no new migrants although the Cuckoo was still present. Offshore 150+ Manx Shearwater passed east with a Great Northern Diver south and a Red-throated Diver on the sea. Over high tide there were 34 Ringed Plover, 30 Whimbrel, 17 Sanderling, 16 Dunlin, 14 Bar-tailed Godwit, 11 Grey Plover and three Turnstone in the estuary.

Despite the continuing northerlies a few migrants continue to struggle through with a Spotted Flycatcher by the First Pond, a Garden Warbler in Dead Dolphin Wood and at least six Wheatear on site. A pair of Shelduck and a Common Sandpiper were rare sightings for the Main Pond, the sandpiper being the first migrant record this year. Elsewhere the Cuckoo was still present, 60+ Swift flew through, three Common Tern were offshore and on the dropping evening tide 43 Dunlin and 29 Ringed Plover were in the Bight.

The highlight was a movement of Swift all day with a site record count of 843 through. Over movement overhead was limited to several hundred Racing Pigeon, a single Hobby, 28 Swallow and four House Martin. Other migrants included a Cuckoo feeding on caterpillars along the Dune Ridge, at least three Whinchat and six Wheatear which all moved rapidly through the site. Offshore a Great Northern Diver flew south early morning and three Common Tern and a first summer Mediterranean Gull were feeding with 140+ Black-headed Gull. Elsewhere wader numbers have increased slightly with 156 Dunlin, 30 Ringed Plover, 26 Whimbrel, 17 Sanderling, 12 Bar-tailed Godwit, four Grey Plover and a Turnstone; the Slavonian Grebe also in the estuary. 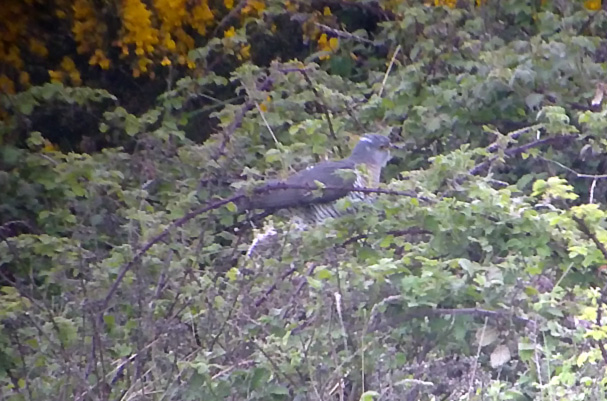 A single Roseate and at least three Arctic Tern were offshore mid-afternoon within a flock of 'commic' tern - also offshore 19 Common Scoter, two Red-throated Diver and 200+ Black-headed Gull. Elsewhere a Yellow Wagtail was overhead with 45 Swift and 35 Swallow.

Despite the arrival of a weather front mid morning today was even quieter, the only migrants were three Yellow Wagtail, a Swift and 30 Swallow overhead and four Wheatear on site. In the estuary the summer plumaged Slavonian Grebe made a reappearance with 50+ Whimbrel, 37 Curlew, seven Bar-tailed Godwit, three Sanderling, two Turnstone and a Grey Plover also present. Offshore there were three Common Tern, 12 Great-crested Grebe and seven Common Scoter.

A quiet day, especially for the time of year, with grounded migrants limited to two Wheatear and two Stonechat, overhead there were just three Yellow Wagtail, three Jackdaw and a Budgerigar! Elsewhere two Little and two Common Tern were offshore and in the estuary there were 30+ Whimbrel, eight Bar-tailed Godwit, three Little Egret and a Redshank.

Migrants included the first Garden Warbler and Whinchat of the year in the Entrance Bushes and Greenland Lake respectively, more unexpected was the first Brambling of the year which flew NE early morning - the first May record for the site. Other records included eight Wheatear and a Willow Warbler on site, 55 Sandwich and two Little Tern offshore and 40+ Whimbrel and a sinensis Cormorant in the estuary.

A single Roseate Tern was offshore in the evening with 86 Sandwich Tern and four Manx Shearwater, earlier a Great Northern Diver flew south. Elsewhere two Wheatear were on site, 60+ Whimbrel were in the estuary and two young Little Grebe remain on the Main Pond.

The first Spotted Flycatcher of the year was by the Main Pond with other new migrants were limited to single flyover Yellow Wagtail, Sand Martin and Swift. Early morning 17 Great Northern Diver flew south offshore with three Red-throated Diver on the sea and feeding birds included two Little Tern, 80+ Kittiwake and a second summer Mediterranean Gull. Elsewhere 120+ Whimbrel were in the estuary with 35 Dunlin and nine Sanderling.

Two Roseate Tern were offshore mid evening with 30+ Sandwich, four Little and just one Common Tern, also offshore the first Red-necked Grebe of the year, an unusual May record, two Red-throated and two Great Northern Diver, a first summer Mediterranean Gull and a skua sp. A female Pied Flycatcher in the Alders behind the Crocus Compound was the first on site since Sept 2008, but was also notable for its seemingly cold appearance and long, but narrow, primary covert patch... Other migrants included a Grasshopper Warbler by the hide, a Sedge Warbler singing at the Main Pond, three Wheatear, a Willow Warbler and at least some of the 21 Whitethroat. Wader counts included 120+ Whimbrel, 53 Dunlin, 14 Sanderling, eight Grey Plover and six Turnstone.